We analysed thousands of trivia questions and put together this list of the very best questions you can use in your very own trivia competitions.

Trivia is a well-known game that is fun to play with family, friends, and colleagues! It tests your general knowledge skills while creating bonds for a lifetime.

Trivia is typically played with a prepared list of fun questions on any topic of your choice.

A host is chosen, and the questions are shared with a group of people, and you compete on who can answer the most problems.

Trivia can be played at any event, from virtual game night to a classic pub quiz during your next night out.

It's a great way to engage people and also learn some new things in the process. You can play it with your friends, colleagues, or family members.

If you're looking for a live trivia game for your group then make sure to check out our friends over at TriviaNerd.

They've got over 100,000 trivia questions in their library all categorised and ready for instant live multiplayer hosting.

How to play trivia?

Designate one person in your group to play the host, and every week you can switch up who the host is.

2. Choose your theme and list of fun trivia questions.

Check-out our awesome list of questions for your next face-to-face or virtual trivia night! The themes are ranging from general, food, drink, entertainment, sports, kid-friendly, geography, animal, science, and funny.

Divide into different groups, and it doesn’t matter how many people are in each team. Trivia time!

Need a tool to run a live multiplayer trivia game? Check out TriviaNerd

Let the friendly competition begin and make sure someone always is keeping score. The team that guesses the correct answers first and with the most points wins. Award a fun prize such as a gift card or a fun trophy. You can also make this activity a weekly one and award an all-time winner. 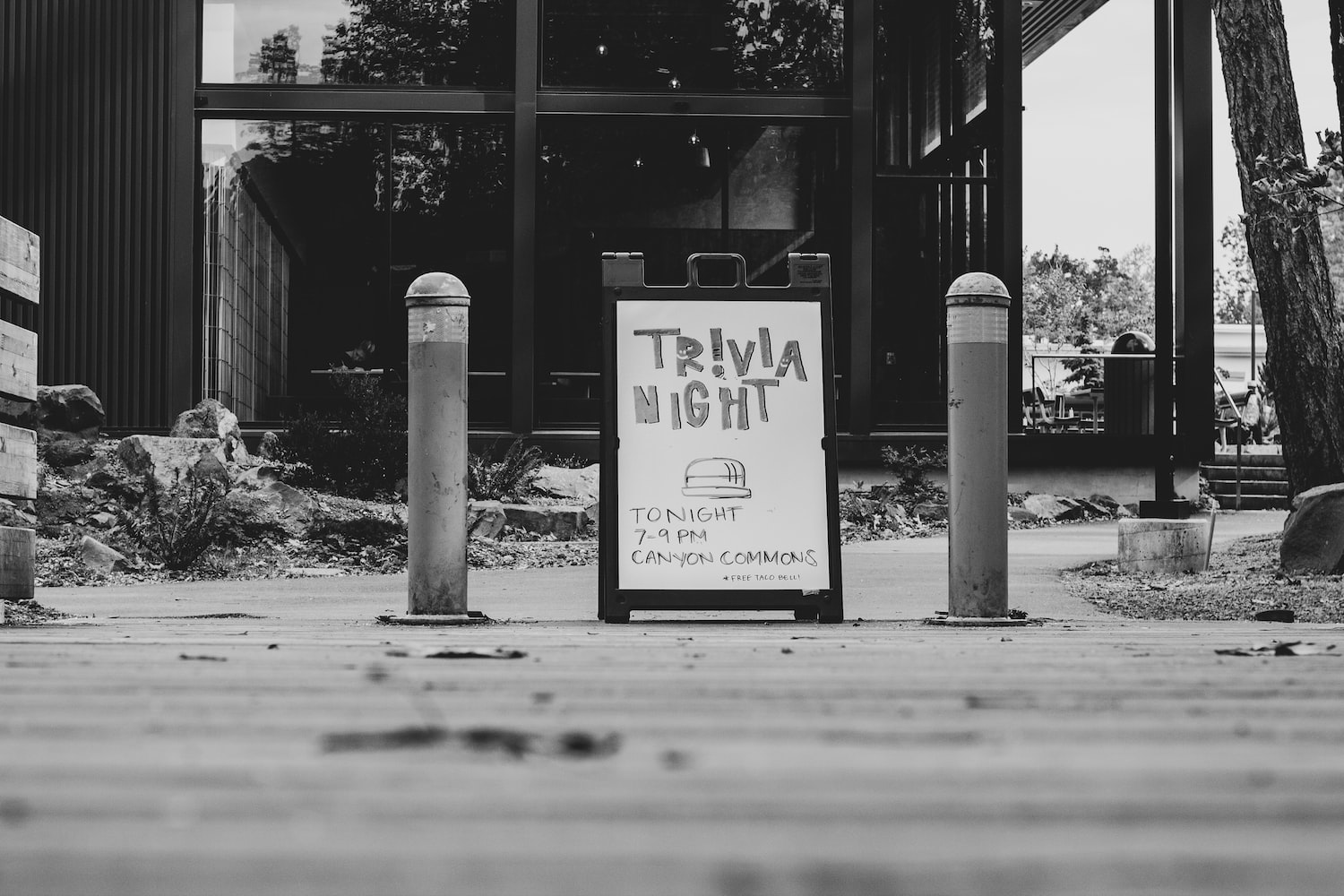 What does “www” stand for in a website browser?

How long is an Olympic swimming pool (in meters)?

What countries made up the original Axis powers in World War II?

Which country do cities of Perth, Adelade & Brisbane belong to?

What geometric shape is generally used for stop signs?

Answer: A period or exclamation point

Who named the Pacific Ocean?

How many languages are written from right to left?

Q: How many countries still have Shilling as currency? Bonus point: Which countries?

What is the name of the man who launched eBay back in 1995?

What is the name of the biggest technology company in South Korea?

Which animal can be seen on the Porsche logo?

Which monarch officially made Valentine's Day a holiday in 1537?

The first dictionary was written by?

Worship of Krishna is observed by which Religious Faith?

What is the name of the World's largest ocean?

Demolition of the Berlin wall separating East and West Germany began in what year?

What is the romanized Arabic word for "moon"?

Who was the first woman pilot to fly solo across the Atlantic? 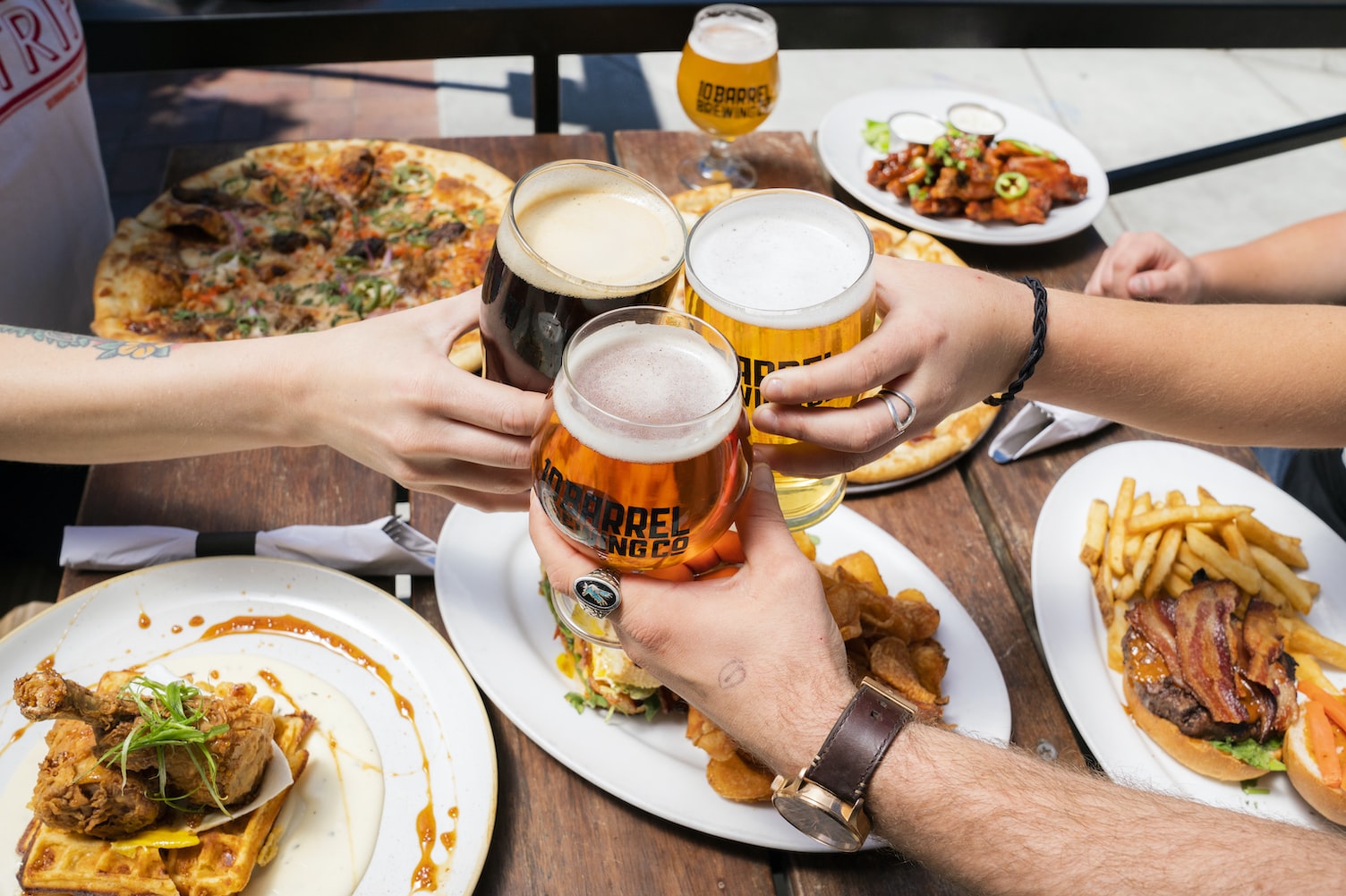 Want to create trivia quizzes for those gastronomy experts in your group? Explore this list to find out who the real food lovers are.

What is the rarest M&M color?

What is the common name for dried plums?

Which country consumes the most chocolate per capita?

What is the name given to Indian food cooked over charcoal in a clay oven?

What was the first soft drink in space?

What is the most consumed manufactured drink in the world?

Which is the only edible food that never goes bad?

"Hendrick’s," "Larios," and "Seagram’s" are some of the best-selling brands of which spirit?

From which country does Gouda cheese originate? 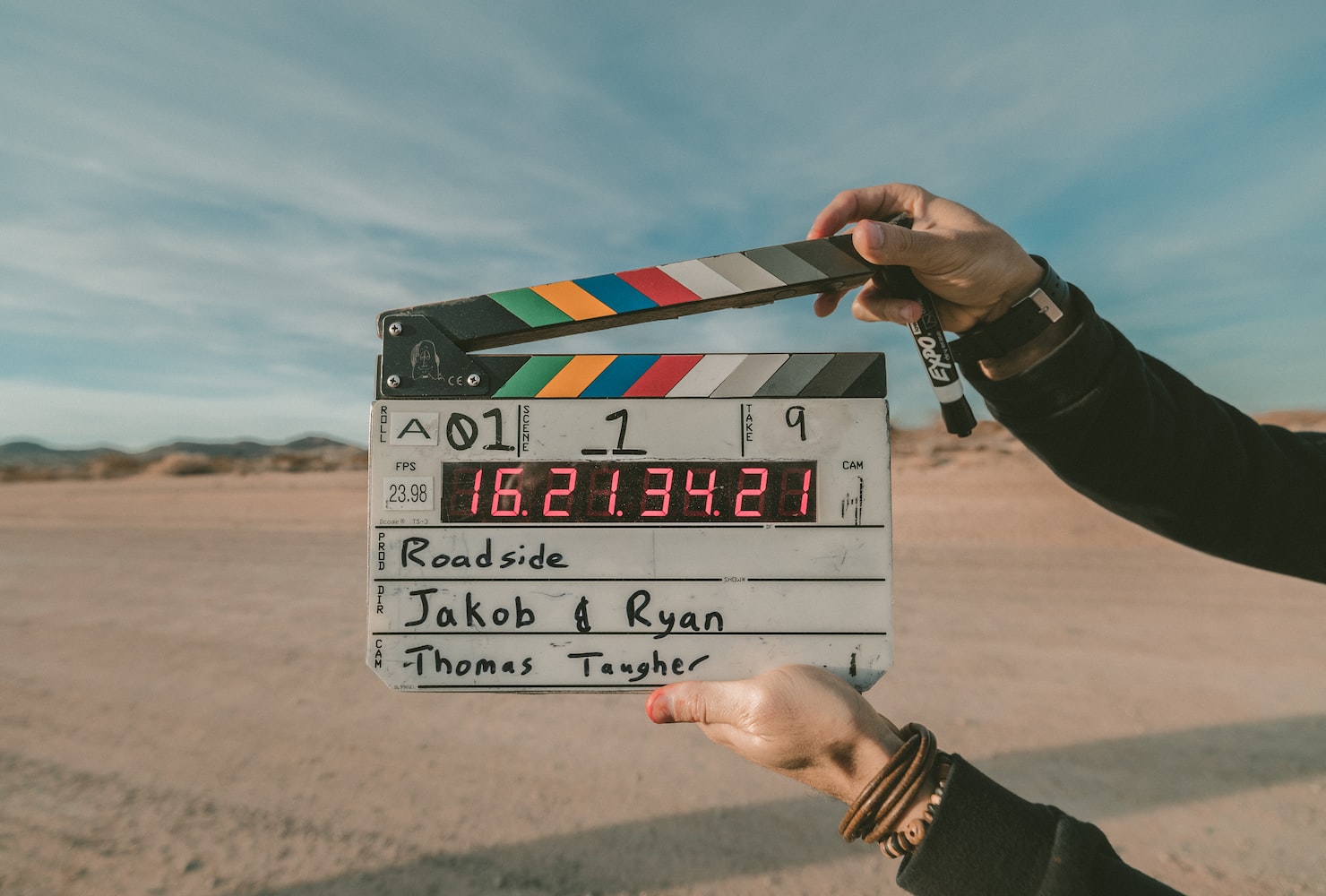 We have you covered with this list of trivia questions from TV shows, movies, and music.

What was the first toy to be advertised on television?

What was the first feature-length animated movie ever released? (Hint: It was a Disney Movie)

What were the four main characters' names in the TV series "Golden Girls" that ran from 1985-1992?

Which Disney Princess talks to the most animals?

What awards has an EGOT winner won?

Answer: An Emmy, Grammy, Oscar, and a Tony

Which member of the Beatles married Yoko Ono?

What are the names of Cinderella’s stepsisters?

The biggest selling music single of all time is?

When Walt Disney was a child, which character did he play in his school function? 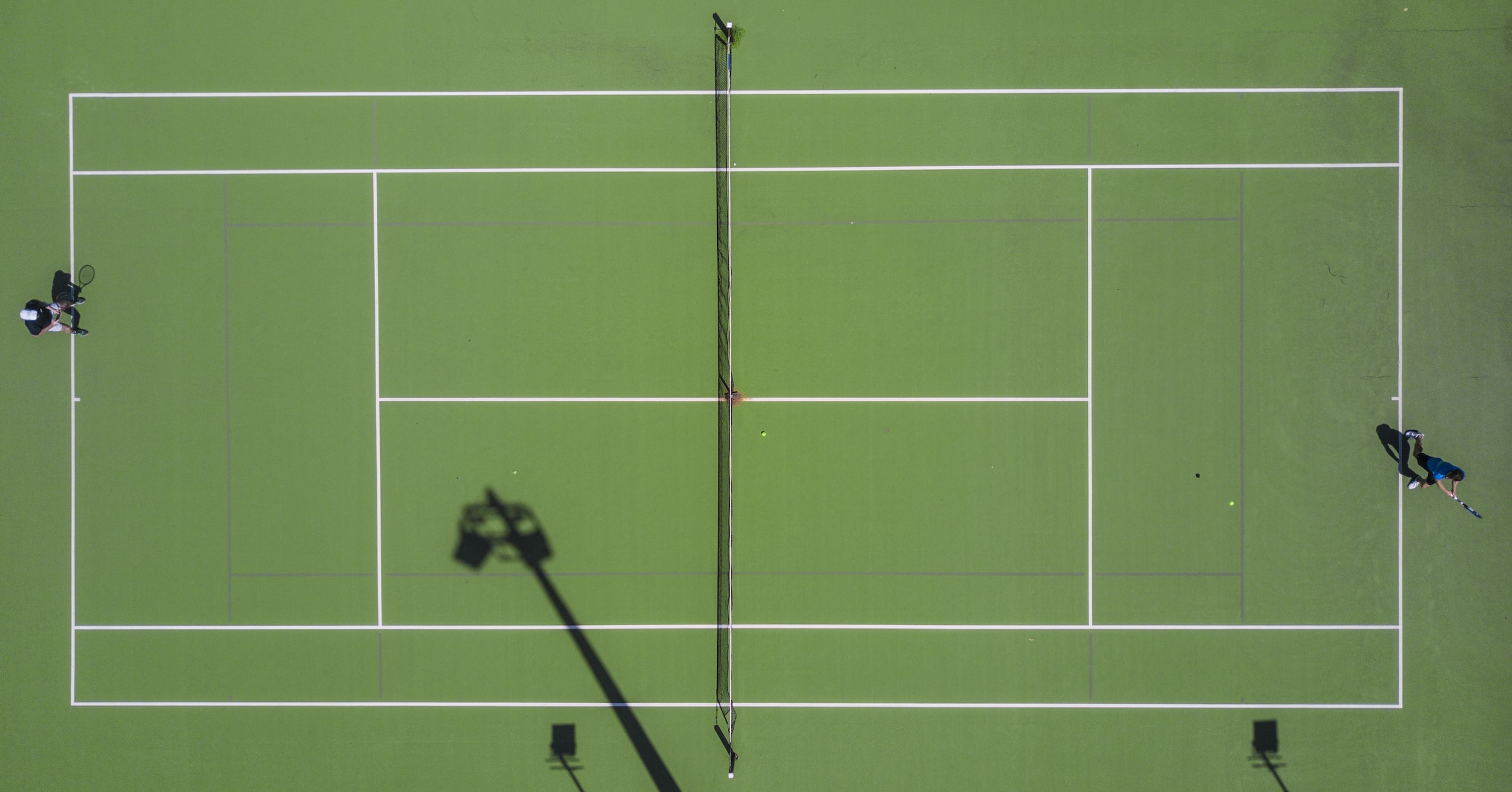 Can you guess the correct answer for any of these 10 sports trivia questions? From American football to the NBA, this list will have you stumped.

Which two countries have not missed one of the modern-day Olympics?

Which is the only American Football team to go a whole season undefeated, including the Super Bowl?

What sport is dubbed the "king of sports"?

What is the name of the professional ice hockey team based in Toronto, Canada?

Who was the first gymnast to score a perfect 10 score?

Dump, floater, and wipe are terms used in which team sport?

Who was the first female driver to score points in a Grand Prix?

How many points did Michael Jordan score on his first NBA game? 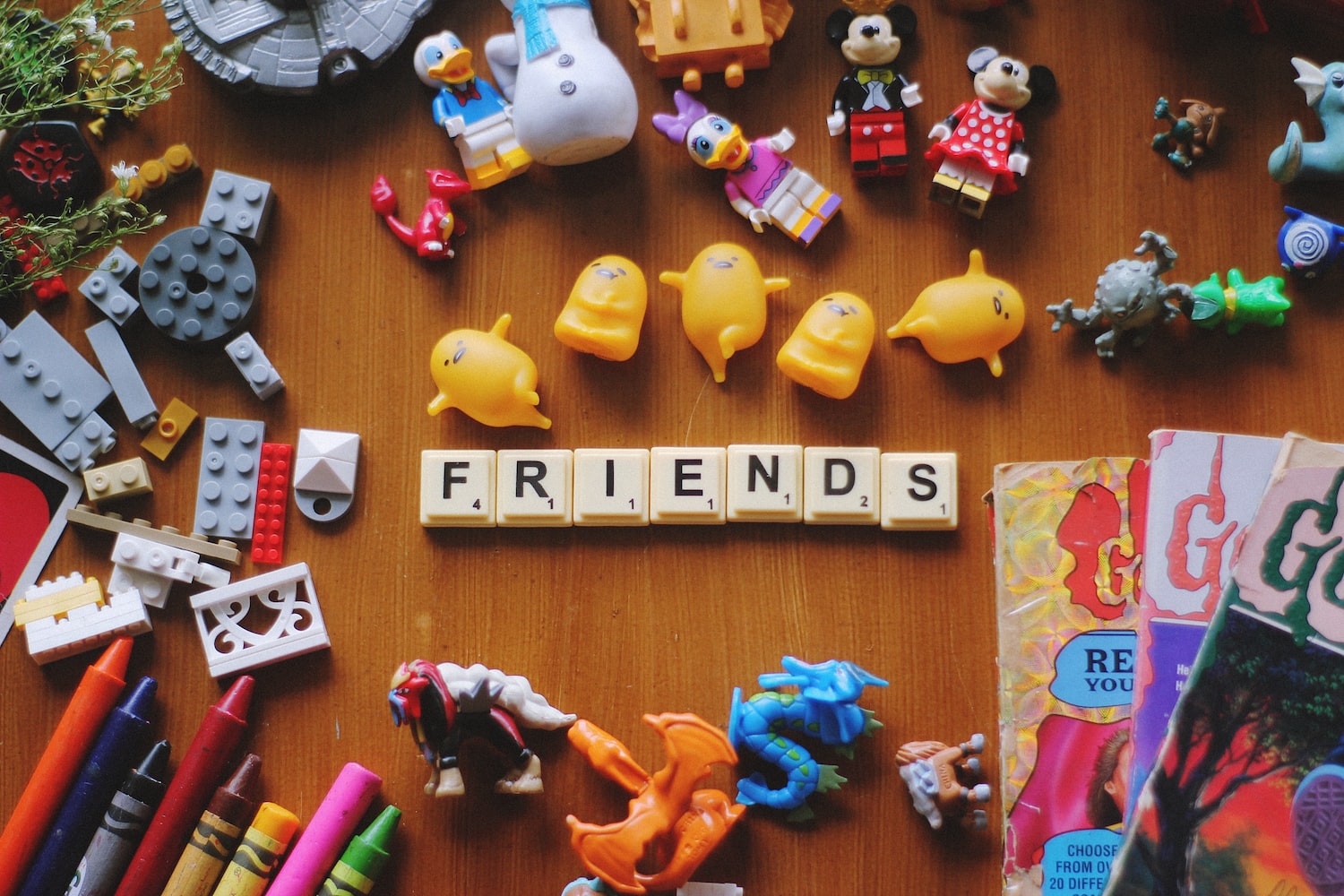 The top questions for kids you can use for any school or family trivia game. We have included challenging and easy questions to be sure there is something for everyone. Take note that some adults might not even know the answers to some of the easy trivia questions. So stay on your toes!

In little red riding hood, who does the wolf dress up as?

“Stars and Stripes” is the nickname of the flag of which country?

Who is the patron saint of Ireland?

How many colors are there in the rainbow?

What color is a ruby?

In the poem Humpty Dumpty, where was Humpty when he fell?

Who was the first U S president

What were Jack and Jill going up the hill to fetch?

Answer: A pale of water

What country is responsible for creating the Olympic Games? Answer: Greece

World travellers, get your world map out and test your geography skills. Get ready to brush up your knowledge on history trivia, capital city names, South America countries and so on. Some questions are going to have you checking the answer twice. What is Earth's largest continent?

What's the smallest country in the world?

Answer: Vatican City (Fun fact. It's less than two-tenths of a square mile!)

Area 51 is located in which U S state?

What country touches the Indian Ocean, the Arabian Sea, and the Bay of Bengal?

What's the city with the most diversity in terms of language?

The ancient Phoenician city of Constantine is located in what modern-day Arab country?

Havana is the capital of what country?

What country has the most natural lakes?

Riyadh is the capital of this Middle-Eastern country.

Answer: The Kingdom of Saudi Arabia

Which Central American country has a name which translates to English as “The Saviour”?

In what country would you find Lake Bled?

Start your trivia night with these interesting animal-themed hard trivia questions. What is the loudest animal on Earth?

How many hearts does an octopus have?

The unicorn is the national animal of which country?

What are the folds of skin on a cat's ears called?

A group of ravens is known as?

How many legs does a spider have?

How long do elephant pregnancies last?

What type of animal is a Flemish giant?

The name of which African animal means "river horse"?

You do not need to be a scientist to get these questions right. Science questions can cover categories like parts of the human body, animal trivia, technology, and so on. Take a guess and see how many trivia questions you get correct.

In what type of matter are atoms most tightly packed?

What is the hottest planet in the solar system?

What is the opposite of matter?

Which of Newton’s Laws states that ‘for every action, there is an equal and opposite reaction?

Answer: The third law of motion

In 2004, what was discovered on the island of Flores in Indonesia?

Answer: Remains of a hobbit-sized human

What is the nearest planet to the sun?

What color is your blood when it’s inside your body?

Answer: Red, the blood contains hemoglobin, which is a red protein.

What is the largest planet in the solar system?

How many teeth does an adult human have?

What's the largest bone in the human body?

Add these trivia questions to get your group of friends to laugh out loud. Plus, it will add to your fun fact list to tell at any party.

What is a duel between three people called?

In the state of Georgia, it’s illegal to eat what with a fork?

Which Tasmanian marsupial is known for its temper?

Iceland diverted roads to avoid disturbing communities of what?

In public places in the state of Florida, what's illegal to do when wearing a swimsuit?

Who invented the word "vomit"?

What can be broken but is never held?

What does come down but never goes up?

What is measured in "Mickeys"?

Answer: The speed of a computer mouse

How many people do you need to start a round of trivia?

At least two people so you can compete against each other, but as we like to say, the more, the merrier!

How many questions should be included?

Trivia normally is divided into a few rounds; we suggest each round include 10 questions. It also depends on how long you would like your trivia event will be.

Typically people like to play for about 90 minutes, and each round of 10 questions can take about 15 minutes to answer. So we suggest including about 60 questions.

How difficult should the questions be?

We suggest including a mix of easy and hard questions with a variety of different subjects. If you only include more challenging questions when creating your list, it can be boring for your group and disheartening if they cannot answer any of them.

Which questions are best used for team building?

Any of the questions on our list will be perfect to include at your next trivia event! But be sure to diversify your list to include different topics to allow each member to answer one correctly.

Try any of these categories for your next trivia night! Trivia is a fun-filled game you can play remotely or in person. It brings a sense of comradery while being competitive. Trivia is an easy team building activity that can cater to a diverse group of people. Looking to play trivia games online, don't forget to check out our list of 13 Trivia Games Your Group Will Love.